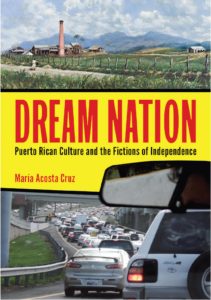 A provocative new book by Clark University associate professor of Spanish María Acosta Cruz uses examples from Puerto Rican literature, history, and pop culture to emphasize how the territory’s residents have taken hold of their imagined independence to give their culture resonance in the global atmosphere.

From the publisher: In “Dream Nation — Puerto Rican Culture and the Fictions of Independence” (Latinidad series: Rutgers University Press) Acosta Cruz explores the 1898 annexation of Puerto Rico to the elections of 2012, stopping at many cultural touchstones along the way. The islanders’ longing for a different outcome from the independence movement and the brighter future it promised exemplifies how a culture can become disconnected from the political expressions of its people.

“My ideas and readings grew and expanded through interactions with my students in the ‘Caribbean Literatures’ and ‘The National Imagination’ courses, among others,” Acosta Cruz said. “With their happy curiosity, dogged search for meaning, and their patience with a professor prone to wild tangents, they made our shared discoveries and love of culture all the more productive and enjoyable.”

Frederick Luis Aldama, author of “A Concise History of Latino/a Literature” writes: “No other book weaves together so beautifully and completely the political, historical, social, economic, and cultural threads which make up the tapestry of Puerto Rican nationalism. Graceful, thought provoking, and deeply learned, ‘Dream Nation’ will certainly have a lasting impact.”

Born and raised in Cabo rojo, Puerto Rico, Acosta Cruz has been at Clark since 1986 and is affiliated with the programs in Women’s and Gender Studies and Race and Ethnic Relations. Her research focuses on gender, identity and history, specifically Caribbean fiction, Latino literature in the United States, and women’s writing. Her work has appeared in the journals Hispanófila, Revista Iberoamericana, Revista de Estudios Hispánicos, and Chasqui Revista de Literatura Latinoamericana. “Dream Nation” is also part of the American Literatures Initiative from NYU, Fordham, Temple and Virginia University Presses, a series funded by the Mellon Foundation. She received a B.A. from the University of Puerto Rico at Mayaguez, and an M.A. and Ph.D. in comparative literature from the State University of New York at Binghamton.

Acosta Cruz expressed gratitude to those supporting her research and work at Clark and beyond: “Two provosts, Fred Greenaway and David Angel (who is now Clark’s extraordinary president) gave me their steadfast support and academic guidance. My thinking has been profoundly impacted by the work of Clark’s Higgins School of Humanities, which, under the leadership of Sarah Buie and Amy Richter, encourages a broad community of dialogue. Our wonderful librarians and Clark’s information technology crew saw to it that all possible research support and tools were at my disposal. The Foreign Languages & Literatures Department, particularly Alice Valentine, Robert D. Tobin, Marvin D’Lugo, and Juan Pablo Rivera, helped me develop the guiding ideas about nationhood at the heart of the book. I could not have been chair of the department and written the book without Dilma Lucena, our fearless department manager.”