One year since he appeared at the podium during President Barack Obama’s inauguration, celebrated poet Richard Blanco will join the Clark University celebration of Martin Luther King Day, beginning at 4 p.m. Monday, Jan. 20, in Razzo Hall, Traina Center for the Arts, 92 Downing Street.

In “Journey to the Podium,” Blanco will consider his remarkable journey as a gay Cuban-American immigrant, the “complex navigation through his cultural, sexual, and artistic identities,” and what is means “to become an American.”

Blanco was chosen, after the re-election of President Obama, to serve as the fifth inaugural poet of the United States. He follows in the footsteps of such great writers as Robert Frost and Maya Angelou. Blanco composed “One Today” for the occasion and read the poem at the podium during the inauguration on Jan. 21, 2013. He became the first Latino, immigrant, and gay writer bestowed by such an honor, as well as the youngest ever at the age of 44.

“As inaugural poet, Blanco has spoken for and to the nation, bringing a new set of perspectives through literature to the question of what it means to be an American.”

“I was so proud of our country and our president, when I heard Richard Blanco was going to read a poem at the inauguration. The very fact that there was going to be poetry at the inauguration was exciting,” said Professor Robert Deam Tobin, the Henry J. Leir Chair in Foreign Languages and Cultures. “When I learned that Blanco lived in Maine, it occurred to me that we could invite him to campus. Our course, the National Imagination, provides a perfect venue for him; it’s a team-taught course about understanding the ‘nation’ through the literature of a variety of different countries. As inaugural poet, Blanco has spoken for and to the nation, bringing a new set of perspectives through literature to the question of what it means to be an American.” 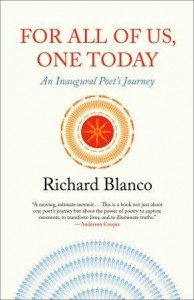 The Office of Diversity and Inclusion at Clark, headed by associate professor of English Betsy Huang, will host a book signing and reception at 5:30 p.m. in the Higgins Lounge at Dana Commons.

This event is free and open to the public. For more information, please contact the Clark University Department of Foreign Languages and Literatures, at 508-793-7234.

Tobin acknowledges numerous other people, organizations and departments at Clark that have assisted or are sponsoring the lecture, including the Office of Diversity and Inclusion, the Higgins School of the Humanities, the Office of the Provost, the Dean of the College and Academic Affairs, Foreign Languages and Literatures, English, Political Science, Women’s and Gender Studies, and Sociology.

“This is an amazing opportunity for our students,” said Belen Atienza, associate professor in the Department of Foreign Languages and Literatures, who has included Blanco’s poems in her course planning. “Poetry is an essential part of any Hispanic or Latin American political and or social event, and I am glad that Clark has chosen precisely Blanco as the poet to honor Dr. King.”

For more about Richard Blanco, visit his website: https://richard-blanco.com/