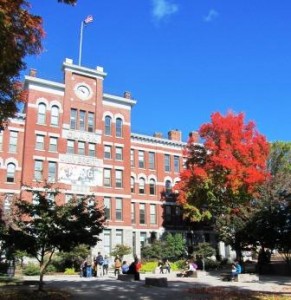 Kiplinger’s Personal Finance has again included Clark University on its list of the country’s best values in private colleges. Kiplinger’s annual list ranks 100 private universities and 100 liberal arts colleges. The top 50 colleges and top 50 universities appear in Kiplinger’s December issue — on newsstands November 5. Clark appears at number 35, up from number 40 in the 2013 edition. The full list is available online now.

Clark University and the other schools included in the 2014 lists represent the colleges that provide high-quality academics at a reasonable cost during these continued tough economic times. The colleges exemplify the attributes parents and students look for in higher education, including small class sizes, a good freshman retention rate and a high four-year graduation rate. Many schools, including Clark, have appeared on the list multiple times.

“With President Obama’s recent emphasis on rating colleges and universities based on their value, our rankings serve as a valuable resource to help students and families make more informed choices,” says Janet Bodnar, editor of Kiplinger’s Personal Finance magazine. “Combining a high-quality education with an affordable price tag is a challenge, but the colleges on this year’s list offer the best of both worlds.”

Donald Honeman, Clark University Dean of Admissions and Financial Aid, said, “With a generous set of financial aid and scholarship options, a tuition-free fifth year master’s program for strong undergraduate students, a remarkably affordable room and board program, and an educational program framed by our LEEP (Liberal Education & Effective Practice) curriculum, Clark has responded to the challenge of affordability and offers a higher education experience that ensures a strong return on families’ educational investment.”

Kiplinger’s rankings measure academic quality and affordability. Academic criteria include the student admission rate (the number of students accepted out of those who apply), the test scores of incoming freshmen, the ratio of students to faculty members, and the four- and five-year graduation rates. On the cost side, Kiplinger’s measures the sticker price, the availability and average amount of need-based and merit-based financial aid, and the average student debt at graduation.