Ellen Hughes-Cromwick began raising red flags in the fall of 2006.

As recounted in the 2012 book “American Icon: Alan Mulally and the Fight to Save Ford Motor Company,” Ford’s chief economic adviser warned about significant shifts in several markets, the proliferation of subprime mortgages, the correction taking place in the housing market, tightening policies in a number of central banks around the globe, and concern that financial institutions were not being adequately policed. In the past, she said, consequences of such developments had included devaluation, corporate implosion, and economic recession.

Today, Hughes-Cromwick is quick to note that while she and her team saw some troubling trends, no one could forecast with any certainty what they would mean in the long run. “We got some things right,” she acknowledges, “but there was much we didn’t know.”

Her cautions caught the attention of Alan Mulally, president and CEO of Ford, and his leadership team. They didn’t just hear her. They heeded her.

Even before the global recession descended in 2008-2009, the Ford Motor Company took action to restructure its operations, and bore the distinction of being the only Big Three automaker that did not declare bankruptcy or take a government bailout during one of the worst economic meltdowns in generations. (Ford did borrow $5.9 billion from the U.S. government in 2009 to fund development of energy-efficient vehicles.)

Recalling the saga, “American Icon” author Bryce Hoffman described the economist whose foresight helped Ford successfully navigate the fiscal crisis: “Serious and analytical, Hughes-Cromwick was a meticulous East Coaster from Upstate New York who always seemed to be crunching numbers in the back of her mind, even in the middle of a conversation. She had a master’s in international development and a Ph.D. in economics from Clark University.”

Ellen Hughes-Cromwick, M.A. ’88, Ph.D. ’86, joined Ford in 1996, the same year the company’s 250 millionth vehicle rolled off the assembly line. Prior to that time, she’d honed her skills in academia (as a professor at Trinity College), government (as staff economist with the President’s Council of Economic Advisors during the Reagan administration) and the corporate world (as senior economist at Mellon Bank). Her promotion to director and global chief economist at Ford in 2004 came during a difficult time for the company. A year later, Ford’s share of the North American market would slip to its lowest level since 1920 and the company posted a $1.6 billion loss. Standard and Poor’s would downgrade the company’s bonds to junk status.

In early 2006, Ford, in a bold and risky move, announced its decision to mortgage all its assets for approximately $25 billion to finance a new business plan dubbed “Way Forward,” described in the company’s 2005 annual report as “a comprehensive plan for restructuring and reinvigorating our automotive business in North America.” The plan was intended to realign product capacity to meet demand, and included drastic cuts in personnel and wages, shuttering of manufacturing facilities, and material cost reductions.

Hughes-Cromwick says Ford’s actions allowed the company to avoid the path of competitors GM and Chrysler during the the worst of the recession.

“Ford and its leadership took very decisive action to restructure, and, working together, we were able to be successful,” she says. “We made different choices and worked very decisively to ensure that, following the financial downturn, the company was going to be a very strong, lean global enterprise. We aggressively restructured to operate profitably, to develop and accelerate plans for new products for our customers, and to finance our plan and improve our balance sheet.” 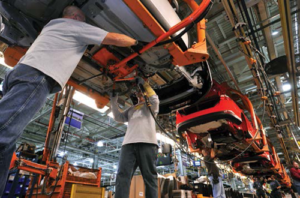 CEO Alan Mulally describes Hughes-Cromwick’s role at Ford as “leading the global economic and automobile industry analyses that enable Ford to design and produce the best cars and trucks in the world affordably,” adding, “We treasure her leadership and contributions.”

Remembered fondly by her Clark dissertation adviser Maurice “Maury” Weinrobe as “conspicuous by her unwillingness to self-promote,” Hughes- Cromwick is characteristically modest when asked to comment on her contribution to Ford’s ability to weather the economic storm.

“I would say that we all did it together as a team,” she says. “I think that’s so important. No one person can accomplish all the great things that happened to make this company successful. I have an outstanding team here that many days I’m humbled to work with. They’re very talented, very committed.”

It’s a top-to-bottom effort, Hughes-Cromwick notes. She praises Mulally and William Clay “Bill” Ford Jr., great-grandson of Henry Ford and chairman of the board of directors, both of whom she describes as “very motivating,” and also credits the role Ford’s union employees play in the company’s achievements.

Ellen had her early economics training at Clark University. She and her husband, Paul Hughes-Cromwick, both graduates of Notre Dame University, had returned to Paul’s hometown of Worcester after their stint as Peace Corps volunteers in Cote d’Ivoire was cut short by illness. Ellen worked first in Clark’s Department of International Development, translating documents from French to English, before applying to its master’s program and, later, the Ph.D. program in economics. She earned her Ph.D. first, in 1986, followed two years later by her master’s degree in international development. (Paul earned his master’s in economics in 1989, and coached the crew team.) 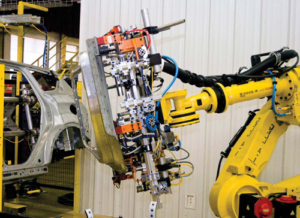 Maury Weinrobe, professor emeritus of economics, who, in addition to serving as Ellen’s adviser joined her for morning runs, regards his former student as being “in a class of her own.”

Ellen Hughes-Cromwick describes in glowing terms what the opportunity to study under Weinrobe’s tutelage meant to her. “I owe so much to Maury in terms of my understanding of economics,” she says. “His mentoring of me has been very special and really unique. I feel so fortunate I was able to take classes from him, and also to learn from him over many years.”

The Hughes-Cromwicks, through their affiliation with the National Association for Business Economics, have funded several one-semester stipends for Clark University economics graduate students in honor of Weinrobe.

Says Weinrobe, “Ellen is one of those quiet people who affects history.”

Before a Ford motor vehicle can be profitably produced, assumptions must be made about what customers want and can afford, about the accessibility and price of materials needed to build cars, and about the availability, quality and cost of labor. All these assumptions are based on careful assessments of economic and automotive trends, both local and global, provided by Hughes-Cromwick and her team so that Ford can allocate capital and decide which products to produce for its approximately 85 different markets around the world. The work is precise; the stakes are high.

“We use a lot of models to determine what will be the pace of vehicle ownership rate increases, especially in the emerging markets,” she explains. “In mature markets we’re looking at replacement demand — whether, for example, there’s a boost to vehicle demand because of population growth. We look at demographics databases to understand those dynamics. In some of our mature markets, like the U.S. and Canada, we’re looking at the role of housing recovery and energy-supply growth, and how that might affect demand for commercial vehicle growth.”

If the team isolates economic shifts they think are important, they’ll work with Ford’s decision-makers to determine needed adjustments in areas like production, inventory management, or product pricing. Hughes-Cromwick especially enjoys this opportunity to interact with a wide variety of people throughout the company — from engineers to marketers to factory workers.

“They all understand a lot of economics and are very appreciative of the tools and assessments that we bring to them as they try to make the best decisions possible,” she says. “It’s economics coming alive that really excites all of us.”

The factors influencing vehicle production costs and consumer purchasing at any given time and place are in constant flux, and Hughes-Cromwick’s team must be able to identify, in a timely fashion, a wide range of economically relevant events — social, demographic, political, financial or even climatic — to gauge their potential impact on vehicle production and demand in any given market.

It’s the changeability of the economic landscape that fuels the economist’s palpable enthusiasm for her work.

“Every day is different and that’s what’s so exciting,” she says. “We may see a devaluation that has been taking place in a particular country that requires us to assess its impact on inflation and the likely change in economic growth and vehicle demand. We’re constantly monitoring and analyzing situations, such as Europe. How is Europe’s debt crisis evolving? Has there been enough policy adjustment, both monetarily and fiscally, to ensure more stability and improve the unemployment situation?

“In the case of emerging markets, we’re doing a lot of work on the pace of slowdown in growth. In China and India, for example, we’ve seen how high inflation and high interest rates have an adverse impact on economic growth, and we’re working diligently to understand whether this is a persistent phenomenon or just a business cycle.”

Hughes-Cromwick continues to help Ford think proactively, move nimbly, and respond assertively in a crowded global market still roiled by perilous economic waters. The meticulous numbers-cruncher with a Clark pedigree is committed to seeing the big picture, sometimes even before it appears.