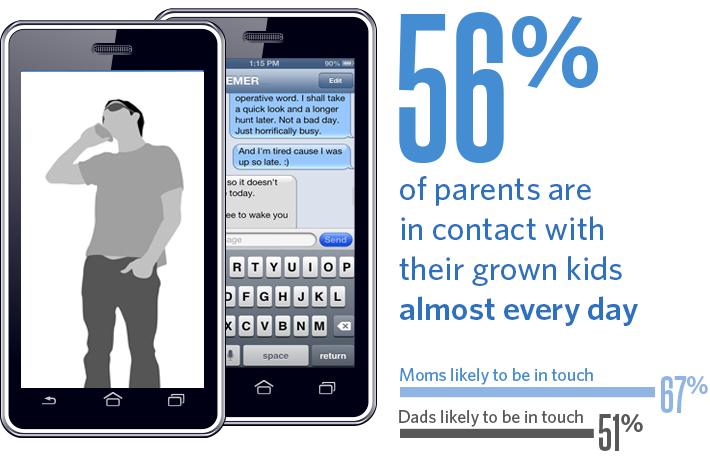 Parents once had to beg their grown children to keep in touch. Today, not so much. Emerging adults (18- to 29-year-olds) are in daily or near-daily contact with their grown children, according to the 2013 Clark University Poll of Parents of Emerging Adults. Texting is common, the poll finds, but the old-fashioned phone call is still the most popular way the two groups stay in touch. “The kids generally prefer texting, but they go along with their parents’ desire for a chat on the phone,” says Jeffrey Jensen Arnett, the Clark University Research Professor of Psychology who directed the poll [www.clarku.edu/clarkpoll/]. “For parents, texting is fine for brief updates, but they like to be able to hear their kids’ voices as well. The phone allows for a more in-depth conversation.” More findings from the Clark University Poll of Parents of Emerging Adults:

“Most emerging adults have not yet found their ‘soul mate’ and, while they are still looking for a life partner, they rely on the connection to their parents as a source of support and nurturance,” Arnett says. In fact, four out of five parents say their 18- to 29-year-old children rely on them for emotional support at least occasionally. Today’s emerging adults are often called “digital natives,” having grown up with personal computers, mobile phones, Facebook, and iPods. Their parents, in contrast, are “digital immigrants” who are not quite as comfortable with many technologies.