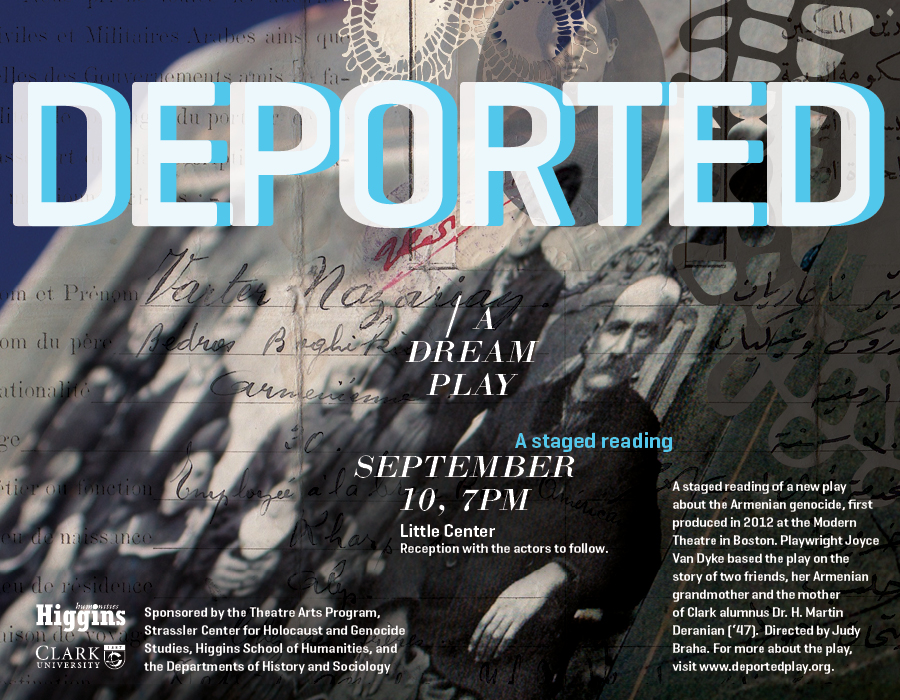 Playwright Joyce Van Dyke stood in the lobby of the New Repertory Theatre following a 2003 performance of her drama, “A Girl’s War,” when she was approached by a distinguished man who introduced himself as Dr. Martin Deranian.

He told her that his mother, Varter Nazarian, and Joyce’s grandmother, Elmas Sarajian, had been very close friends and were deported together during the 1915 genocide of Armenians in Turkey. Deranian suggested that she write a play about them.

Van Dyke had vowed not to address that painful chapter in her family’s history and, besides, her grandmother never spoke of it. But Deranian kept an ace up his sleeve. Decades earlier he’d asked a clergyman who’d known both Varter and Elmas to travel to Fresno, Calif., to interview Elmas about his mother. What emerged was a never-before-revealed saga of their deportation, thick with details Joyce hadn’t known.

“Reading this document was the first time I ever got a sense of my grandmother’s story and the friendship she shared with Varter,” Van Dyke recalls. “These were the only glimpses I had of her deportation.”

With Deranian’s gentle persistence spurring her on, Van Dyke wrote “Deported / a dream play,” which will have a staged reading at Clark University’s Michelson Theater on Tuesday, Sept. 10, at 7 p.m.

“Deported / a dream play” takes place in Providence, where Varter died, and skips through time, relying on Elmas’ memories to summon Varter on stage and evoke their mutual ordeal in the Turkish desert. ”

A dream play is a way of condensing a huge range of experience over time and space in evocative stage images,” Van Dyke says. “I never could have incorporated this as a naturalistic play; the nature of their experience is so surreal that dreams seem the best way of capturing it and making it believable.”

Deranian, a 1947 graduate of Clark, has done extensive research into his mother’s past, discovering that her husband and six children were killed in the genocide. Varter made it to Syria and then to the United States, remarrying and settling in Worcester. The fall issue of the CLARK alumni magazine will feature Varter’s story and profile the work of Taner Akçam, who holds The Robert Aram’52 and Marianne Kaloosdian and Stephen and Marian Mugar Chair in Armenian Genocide Studies at Clark University, to have Turkey acknowledge its culpability in the 1915 genocide.

“Deported / a dream play” is sponsored by the Clark University Theater Arts Program, Strassler Center for Holocaust and Genocide Studies, Higgins School of Humanities, and the departments of History and Sociology.

The play is directed by Judy Braha. A reception with the actors will follow.