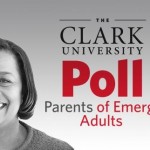 Forget those TV ads where parents gleefully anticipate “alone time” as they wave goodbye to their college-bound children. For most parents of emerging adults, back-to-school time means missing their best friends.

Most parents see their relationship with their emerging adult as having improved greatly in recent years. Two-thirds (66%) of parents agree that they get along better with their 18- to 29-year-old now than when the child was in his or her mid-teens. This is not just the parents’ view: In the 2012 national survey of 18- to 29-year-olds, the Clark University Poll of Emerging Adults, 75% agreed that they get along a lot better with their parents now than they did in their mid-teens.

“Adolescence can be a tough time between parents and kids, but relations almost always improve from adolescence to emerging adulthood,” observes Jeffrey Jensen Arnett, the Clark University Research Professor of Psychology who directed the poll. “It becomes more like a friendship than a strict hierarchy between parent and child.”

Which of the following are current sources of ENJOYMENT for you?
(% of parents surveyed)

Which of the following changes have taken place in your relationship with your child since he/she was 15 years old?

Parents’ reports of positive changes grow more pronounced in the course of the emerging adult years. Three fourths (74%) of parents of an 18- to 21-year-olds name “we enjoy our time together more” as a change that has taken place since the child was age 15, but this rises to 83% for parents of 26- to 29-year-olds. Sixty-four percent of parents with an emerging adult between the ages of 26 and 29 say they have become more like friends now than at age 15, as compared to 49% of parents of 18- to 21-year-olds. Parents of 26- to 29-year-olds are also more likely to believe that their child “sees me more as a person rather than a parent” (55%) compared to parents of younger emerging adults (43%).

Founded in 1887 in Worcester, MA, Clark University  is a small, liberal arts-based research university addressing social and human imperatives on a global scale.