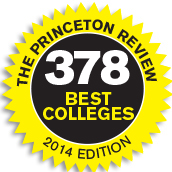 The Princeton Review has again recognized Clark University as one of the country’s best institutions for undergraduate education. Clark is included in the education services company’s 2014 annual college guide, “The Best 378 Colleges,” released August 6.

Only about 15 percent of America’s 2,500 four-year colleges, and four colleges outside the United States, are profiled in the book, which is The Princeton Review’s flagship college guide.

“The Best 378 Colleges” (Random House/Princeton Review) commends Clark University and others for outstanding academics, which is the primary criteria for selection of schools for the book.  The choices are based on institutional data collected about schools, visits to schools over the years, feedback gathered from students, and the opinions of Princeton Review staff and its National College Counselor Advisory Board.

The guide includes extensive comments from Clark students who were surveyed about academics (“A Psychology major says, ‘Clark goes out of its way to provide students with as many opportunities as possible to be involved with their field.’”); student life (“Community involvement is huge.”); and their peers (“This is a college that attracts students who want to do things in this world.”).

More information on Clark in the rankings can be found here.

Clark is also ranked at #18 on the list of “Colleges with Most Liberal Students,” and is featured in The Princeton Review’s Green Guide.

The schools in “The Best 378 Colleges” also have rating scores in eight categories, tallied based on institutional data collected from the schools during the 2012-13 academic year and/or its student survey for the book.  The Princeton Review explains the basis for each ranking list in the book and at www.princetonreview.com/college/college-rankings.aspx.

The Princeton Review has posted the school profiles and ranking lists in “The Best 378 Colleges” at PrincetonReview.com.  There users can find detailed information about the book, access its list, “150 Best Value Colleges for 2012,” and see its “Honor Roll” lists saluting schools that received the highest possible score, 99, for Financial Aid, Fire Safety and Green ratings.

The school profiles in “The Best 378 Colleges” are also published in a line of four e-books (each priced at $9.99) that Random House released on August 6, 2013.  The e-book line, 2014 editions that break out the 378 schools according to their locales, includes: “The Best Midwestern Colleges,” “The Best Northeastern Colleges,” “The Best Southeastern Colleges,” and “The Best West Coast Colleges.” The Princeton Review further recommends those 378 schools (plus an additional 265 schools) in its website feature, “2014 Best Colleges: Region by Region – Northeast/Midwest/Southeast/West,” which profiles a total of 643 schools across the four regions.

The Princeton Review (www.PrincetonReview.com) is an education services company known for its test-prep courses, tutoring, books, and other student resources. Headquartered in Framingham, Mass., the company is not affiliated with Princeton University.