Clark undergraduates Michelle Andrews ’14 and Christina Geller ’13 and a group of graduate students enrolled in the Wildlife Conservation GIS Research Seminar taught by Associate Professor of Geography John Rogan and Research Assistant Professor Florencia Sangermano, recently traveled to the Bronx Zoo, the headquarters of the Wildlife Conservation Society, to present policy recommendations to WCS staff about species habitat protection for guanaco in Argentina and elephants in Tanzania.

The nine students enrolled in the seminar were divided into two groups, the first of which examined the conservation status of Guanaco (humpless camels in southern Argentina) and assessed the threats to viable habitat caused by livestock and ranching activities as well as the sensitivity of the region to climate linkages such as El Nino.  The second group examined the potential impacts of expanding wheat agriculture north of the Tarangire Park (Tanzania) on elephant movements, using radio-collar GPS data, as well as the relationship of precipitation in the region to warming in the Indian Ocean.

The main outputs of both studies were the selection of potential conservation areas to protect the habitat of the target species. 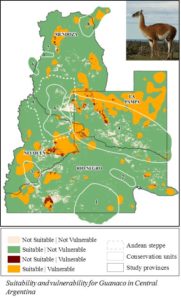 “This diversity allowed all students to contribute to different aspects of the research and to learn from each other,” said professor Sangermano.

According to Andrews, a geography major who was the sole undergraduate in the first research group consisting of five students, “It was good to learn from [the others] as they all had more knowledge and experience in GIS and remote sensing than I did at the beginning of the project. This situation made the experience even more valuable to me.”

Andrews said she found developing research questions, compiling the data and processing it correctly, changing objectives and questions, and changing study areas to be challenging.

Geller, a double major in economics and geography, worked with the graduate students who were charged with providing policy recommendations on habitat protection of the African elephants in Tanzania, a species that is classified as “vulnerable” due to habitat loss, fragmentation, anthropogenic interactions and ivory poaching. Her group used GIS and remote sensing techniques to create priority conservation maps that can be used to protect the habitat of the African elephant in northern Tanzania.

Andrews described the opportunity to do GIS consulting and research as “enlightening” and “eye-opening;” Geller described it as a “huge challenge.”

“I’ve normally been told the methodology I need to follow to create a final result, and this project required us to think critically, design our own methods, and constantly reevaluate our work,” said Geller. “Unlike other classes, you have no idea if you are on the right tract until you do a check-in with WCS and they express their disapproval or pleasure with your results.” 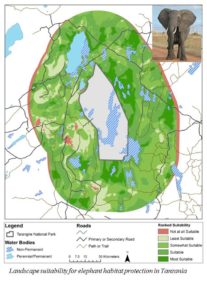 According to Wilkie, by working with students at Clark, WCS has made significant progress on six important questions for conservation.

“The quality of the work by the students has far exceeded expectations and has been extremely well received by WCS staff in the field programs associated with each project,” he said.

In April of 2012, Clark Labs announced their partnership with the Wildlife Conservation Society (WCS) to provide this research seminar geared specifically for real-world conservation projects. The seminar explores various remote sensing techniques and spatial analytical tools for different patterns of environmental degradation in different landscapes. The projects are linked to landscapes and regions where the WCS is actively working.

Professor Rogan says the seminar allows the Clark students to apply all the knowledge they’ve gathered throughout their education at Clark to solve real-world conservation problems.

“This relationship contributes to Clark University’s newly launched Liberal Education and Effective Practice (LEEP) initiative by providing an invaluable applied research experience that not only allows students to gain an education in GIS, remote sensing and conservation practices, it builds a skillset for the real world by also incorporating project management, professional presentations and networking.”