Cheryle St. Onge ’83 sees the big picture through her photographs

When she studies a smattering of seeds in her palm, or observes a series of waves crashing on the Maine coast, Cheryle St. Onge ’83 sees more than the byproduct of natural forces — she sees art. And with the click of a shutter, she makes art. 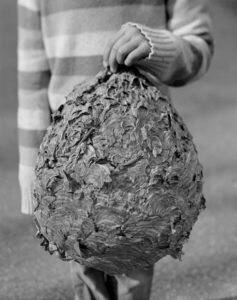 St. Onge employs an 8 x 10 view camera, in tandem with her seasoned eye, to such effect that she earned a 2009 John Simon Guggenheim Fellowship and has exhibited her photographs widely, including at Princeton University, the Massachusetts College of Art and Center for Maine Contemporary Art. The Museum of Fine Arts, Houston last year acquired two of St. Onge’s images (pictured) from her “Natural Findings” portfolio for permanent display.

Through June 8, her work is on exhibit at the University of Maine Museum of Art in Bangor, Maine, as part of “The I-95 Triennial: From Connecticut to Maine,” which features an array of media by artists from five New England states (Connecticut, Maine, Massachusetts, New Hampshire and Rhode Island). Her photos also appear in four books and have earned numerous awards and residencies, including a Polaroid Materials Grant.

“My pictures,” she wrote in her artist’s statement for the Guggenheim Fellowship, “in the tradition of natural collections, are about observation and knowledge, about wanting to learn more, about a long look and the wonder. When my children find a frog, put it in a mayonnaise bottle and stare, I was reminded that I am still in awe of our natural environment, and in love with the limitless scrutiny that is possible though a photograph.” 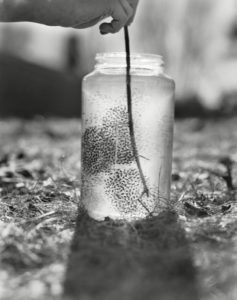 Many of St. Onge’s photographic studies depict a kind of dream state where childhood and nature intersect (she sometimes includes her three children in her black-and-white photographs), striking a fine balance between “what you remember from your childhood and what you now know as an adult.”

Other sets of work evoke her passion for horses and an abiding appreciation for architectural and decorative detail, which she’s catalogued in homes across New England, the Eastern Seaboard, Italy and the Bahamas.

St. Onge, a Worcester native, describes Clark University as an “enchanting place” that drew her there as an undergraduate. She later earned an M.F.A. from Massachusetts College of Art, Boston, and interned at M.I.T. before returning to Clark to teach photography through COPACE for more than a decade, and to lead art and writing workshops for high school students at the Worcester Art Museum. She now teaches at the University of New Hampshire. 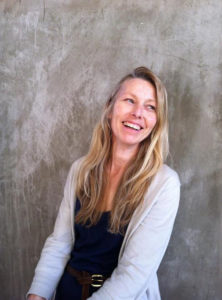 She notes with a laugh that marketing her photography can “be awful, terrible,” a sort of unnatural-feeling process for many artists who are by nature introspective (she likens some meetings with the powers-that-be at art institutions to speed dating). But exposing oneself commercially, with all the bumps and bruises that entails, is a necessary evil. “It helps to know that we all have to do this,” she says. “As you get older you get better at making connections.”

St. Onge splits her time with her family between Durham, N.H., and coastal Maine. This summer she’s working on a new project titled “Offshore with NOAA” that will blend art and science. Positioned in a small boat off the Maine coast, she will photograph waves and sea movements that are informed by wind, weather and other data monitored by the National Oceanic and Atmospheric Administration.

“Each photograph in this series is meant as a visual record of a particular island, named by settlers, coveted by birds, a waypoint on a GPS, where the culmination of temperature and wind literally crash ashore as waves,” she says. “By extension, the sun’s warmth, the moon’s gravitational pull on our ocean tides and the resulting energy manifested as waves are recorded in a single photograph.”