The Clark community was saddened to learn of the July 3 death of Paul Bottis ’84, the former longtime director of Physical Plant (now Facilities Management); read his obituary here. This story originally appeared in the spring 2013 issue of Clark alumni magazine.

September 14, 2012, was sunny and warm, a gorgeous late-summer day on the Clark campus. For Paul Bottis ’84, it was even more than beautiful. It was perfect.

On that day, President David Angel officially dedicated the closed section of Downing Street, from Florence to Woodland Street, as a pedestrian plaza in honor of donors William ’76 and Jane ’75 Mosakowski. The Downing transformation was the capper of Bottis’ 35-year Clark career, a project whose completion allowed him to ease into retirement in December with a sense of satisfaction and finality.

That’s not a familiar state for Bottis, who as director of Physical Plant worked tirelessly to expand and beautify a campus that at one time would have been considered a liability but is now a clear asset. In his worldview, Clark is a living, breathing organism that benefits from positive change in both its outward appearance and the guts of its infrastructure.

He realized the potential the day he arrived as a union carpenter to help rehab the former Jefferson Hall. “I saw a huge opportunity here,” he recalls. “The place needed somebody with some vision who could look at what was needed and find a way to get it done.”

Bottis was hired in January 1977 and immediately began making his presence known. An early endeavor was painting the dorms and offices with bone-white paint that’s come to be known as “Bottis Beige” (supplanting “Bloodgood Beige,” the hue named for former chief financial officer William Bloodgood who, legend has it, bought a trainload of the stuff).

“One of the first things I did at Clark was institute a professional painting crew,” he recalls. “The exterior of Jonas Clark hadn’t been painted in sixty years; students had been allowed to paint their dorm rooms any color they wanted. I think just these small kinds of changes right away helped make us more attractive to students.”

Bottis, who’d owned a home building business, transformed his crew into an in-house construction company capable of executing major projects at a fraction of the cost of an outside contractor. He points to the rehabilitation of the Marsh Institute and Harrington House, and the closing and landscaping of a portion of Woodland Street that once encroached on the campus, as examples of his team’s handiwork. 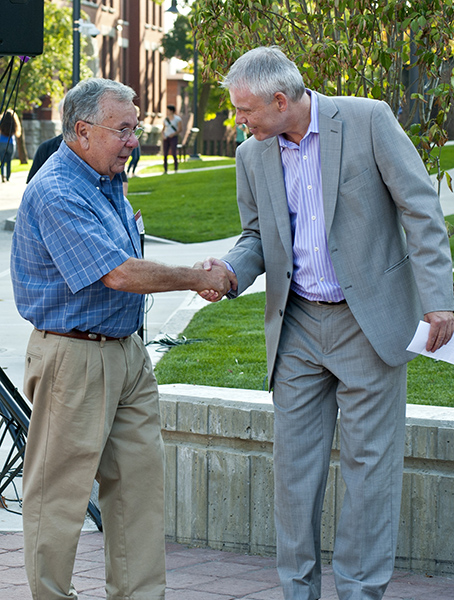 His crew also worked in tandem with outside construction companies on everything from the building of the Academic Commons to the creation of the Downing Street plaza. The latter was something he’d wanted to tackle ever since a Clark administrative assistant was struck by a car while crossing the street.

“Downing Street made no sense at all,” he says. “You had kids walking out of Wright Hall in the morning, earplugs in, thinking about breakfast, and they’d be crossing while cars are flying east up that hill with the sun in the drivers’ eyes. It was a mess, and I’m so happy it finally is fixed.”

Bottis has a reputation as a no-nonsense guy — he comes from a family of builders who value a strong work ethic. And his management style? He says he fashioned it from the principles he learned during his time as a U.S. Marine.

“I’m not one of those guys who sits back and directs. If someone says, ‘We can’t do this,’ then get out of my way and I’ll show you how to do it. It doesn’t matter what the job is. If I see a new groundsman and he doesn’t know how to use a rake properly, I’ll say, ‘Give me the rake. Here’s how it’s done.’”

His commitment to Clark kept him constantly strategizing ways to improve the campus.

“As a manager, you look for department heads who bring you ideas about what we can do to make a difference,” says Jim Collins, executive vice president and treasurer, who worked with Bottis on numerous projects. “Paul had four or five of those ideas a week. He was good, but I don’t think people realize how good.”

When Bottis says he’s “left a good part of myself on this campus,” he’s not simply talking about the new buildings and reimagined spaces that he brought to fruition. He’s referring to the commitment to Clark’s success that emerges from Physical Plant with as much intent as any other department.

“Ultimately it’s all about the kids,” he says. “We also help educate these students; they learn by how we interact with them and from the professionalism we show one another. It’s wonderful to see them come here and watch them grow.

“At reunion time my friends would say to me, ‘You must be bummed having to work during a beautiful May weekend.’ They were wrong. I wouldn’t have missed that for anything.”