According to a new book by Abbie E. Goldberg, associate professor in the Department of Psychology at Clark University, when gay men adopt, they perceive they are more readily accepted by their family members than they were when they were childless.

This finding, and many other findings relevant to gay men’s experiences of adoption (e.g., dealing with discrimination in the adoption process; navigating changed relationships with friends, post-parenthood; dealing with enhanced visibility in their communities as gay male-headed, sometimes multiracial, families) are documented in “Gay Dads: Transitions to adoptive fatherhood” (NYU Press, July 2012).  Goldberg’s is the first full-length book of its kind to explore gay men’s transition to parenthood; it draws on empirical data from her in-depth interviews with 70 gay men and their experiences as they navigated first-time parenthood.

“Gay men’s fathering experiences have been vastly understudied,” said Goldberg, “so this book represents an intimate and intriguing look at their experiences, challenges, and joys.” According to Goldberg, when gay couples become parents, they face a host of questions and issues that their straight counterparts may never have to consider.  How important is it for each partner to have a biological tie to their child?  How will they become parents: will they pursue surrogacy, or will they adopt? Will both partners legally be able to adopt their child? Will they have to hide their relationship to speed up the adoption process? Will one partner be the primary breadwinner? How will their lives change, now that the presence of a child has made their relationship visible to the rest of the world? 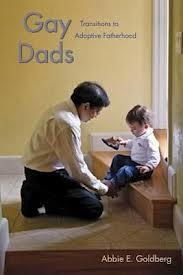 In “Gay Dads,” Goldberg reveals the ways in which gay fathers approach and negotiate parenthood when they adopt.  It draws from couples as they navigate the structural and symbolic inequalities in the adoption process, provides an insight into how the men renegotiate work and family roles, and sheds light on their experiences stepping “out” as parents and families in their communities. “On a most basic level, exploration of the experiences of gay adoptive fathers has the capacity to stretch and enrich our national understanding of the sexuality, gender, and race contours of ‘family,’” writes Goldberg. “Gay Dads” is accessible to a broad range of audiences, from those in the social sciences to those in the legal profession, from graduate students to gay men considering adoption. David Brodzinsky, professor emeritus of developmental and clinical psychology at Rutgers University, says, “This timely and important book will have significant impact across diverse areas of scholarship and will provide policymakers with thought provoking ideas about the meaning of parenthood and family.”

The book is available through Amazon.com, Barnes & Noble, or at a local bookseller. Goldberg has taught at Clark since 2005.

Her first book, “Lesbian and Gay Parents and their Children: Research on the Family Life Cycle” (APA Books 2009), has won several awards.  She currently serves as a senior research fellow at the Evan B. Donaldson Adoption Institute in Newton, Mass., and is co-editor of “LGBT-Parent Families: Innovations in Research and Implications for Practice” (Springer, October 2012). Goldberg also writes a blog, “Beyond Blood,” for the Psychology Today website.  The blog—about the not-so-alternative families of today: adoptive families, gay parent families, and other families that are born of love and not of blood—can be found at https://www.psychologytoday.com/us/blog/beyond-blood