The workplace has changed dramatically in the past decade; one could argue the pros and cons of such changes.  Labor unions (with membership at an all-time low) have lost influence in the workplace and in the economy, and workers’ job and income security are declining.  How has union influence evolved, and what types of bargaining is prevalent in the 21st century workforce?  Gary N. Chaison, professor of industrial relations at Clark University’s Graduate School of Management, explains how collective bargaining has changed in important and lasting ways over the past decade in his new book, “The New Collective Bargaining” (Springer 2012).

“Collective bargaining has been transformed in significant and lasting ways and that the implicit code of conduct between employers and unions has been eroded,” said Professor Chaison.  “The decline of bargaining is symptomatic of the loss of union influence in the workplace and in the economy.” Chaison’s book describes cases of ultra-concession bargaining and examines the role it has played in unions’ declining influence in the American economy and society.  Chaison also makes a prediction about its role in the future of collective bargaining. 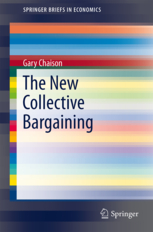 “The collective bargaining of the past decade can be characterized as ultra-concession bargaining because it is an intense and self-perpetuating deviation from earlier concession bargaining.  Employers now act and unions react, rather than the other way around,” said Chaison.  “Employers no longer have to establish a credible case of financial hardship, or commit to the traditional quid pro quo of saving jobs in return for lower labor costs, or guarantee singularity (that concession bargaining is a single event that will not have to be repeated).” Chaison presents his research in a readable manner, avoiding academic, legalistic or technical jargon; his book is accessible to persons interested in the future directions of collective bargaining and unionism in America.  Chaison’s book uses published reports on bargaining and interviews and surveys of bargaining settlements such as those in the automobile industry and government employment to illustrate where concession bargaining is now and where it’s headed. Chaison teaches courses in international labor relations, human resource management and union-management negotiations at Clark.  He is an expert in international labor relations, collective bargaining and union organizing.  He is one of the most widely recognized scholars on unions worldwide. Chaison is the author of four books, his most recent being “Unions in America” (SAGE Publications 2006) and co-author, with fellow Clark Professor Barbara Bigelow, of “Unions and Legitimacy” (Cornell University Press 2002).  He has published several articles on the determinants of union growth in the United States and Canada, the causes and consequences of union mergers in the United States as well as several other countries, and the unions’ use of the Internet.  He is quoted regularly by national and international media.   He has been on the Clark faculty since 1981.