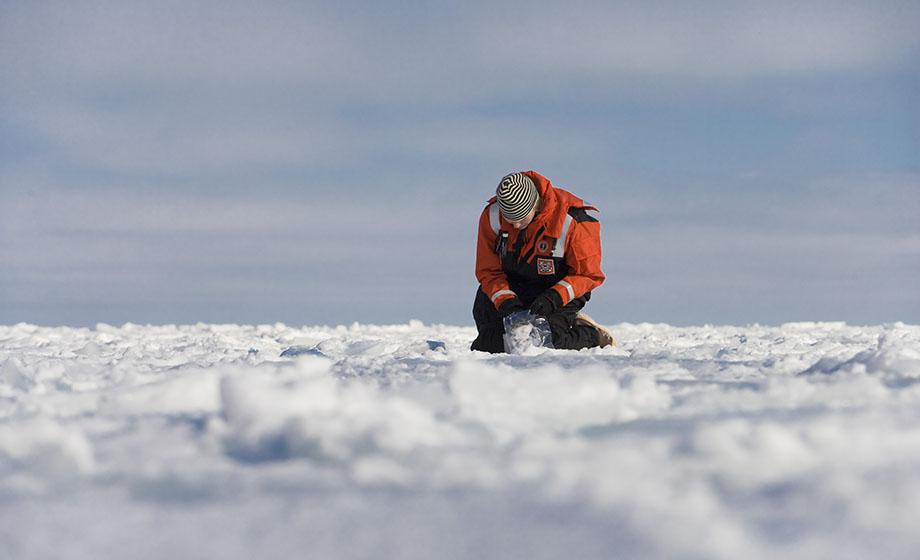 NASA announced an “astounding” discovery of huge phytoplankton blooms thriving where least expected – beneath the Arctic Ocean sea ice. The report titled “Massive Phytoplankton Blooms under Arctic Sea Ice” was published in the journal Science on Thursday. Co-authored by Karen Frey, an assistant professor in the Graduate School of Geography at Clark University, the report was the topic of a live NASA webcast and media teleconference on June 7.

* Watch a video about the discovery. To check out more media coverage, visit here. *

Frey and fellow scientists were stunned to discover huge, “pea-soup” swathes of highly productive phytoplankton blooms above Arctic Ocean continental shelves below the pack ice in the Chukchi Sea. The research was conducted northwest of Alaska onboard a U.S. Coast Guard icebreaker during the summers of 2010 and 2011, part of the multi-year, NASA-sponsored mission called ICESCAPE (Impacts of Climate change on the Eco-Systems and Chemistry of the Arctic Pacific Environment).

“This is what you live for as a scientist,” expedition team member Don Perovich told media. “It’s a new Arctic Ocean that’s full of surprises.” Perovich is a geophysicist with the U.S. Army Cold Regions and Engineering Laboratory in Hanover, N.H. According to the report, the blooms appeared “where light transmission has increased in recent decades due to thinning ice cover and proliferation of melt ponds. … Evidence suggests that under-ice phytoplankton blooms may be more widespread over nutrient-rich Arctic continental shelves, and that satellite-based estimates of annual primary production in these waters may be underestimated by up to 10-fold.”

“Phytoplankton are the base of the entire marine food chain and are critically dependent on the availability of nutrients and light,” Frey noted. During the ICESCAPE mission, she measured the under-ice light field. “We found a surprisingly large amount of light that is transmitted through the sea-ice cover, particularly through the turquoise-blue melt ponds that dot the bare-white ice cover,” she said. “Those melt ponds essentially act like skylights, transmitting up to four times the light compared to un-ponded sea ice in these areas. These phytoplankton blooms were found under a completely consolidated sea ice pack, and the presence of melt ponds is why there is enough light for these large blooms to occur.

Our findings lead to important questions as we consider the impact of climate warming on the physical properties of sea ice, which have critical consequences for the entire arctic marine ecosystem.” At Clark, Frey has been involved in several research expeditions to study climate change in the Arctic. Besides the NASA ICESCAPE mission, she is a co-principal investigator of “The Polaris Project: Rising Stars in the Arctic” (National Science Foundation), leading top student researchers from Clark (and around the country) to East Siberia to study the hydrological and biogeochemical impacts of climate warming and permafrost thaw. Frey and three of her students will join this summer’s month-long Polaris Project. In August, she will travel to the Alaskan North Slope to study the biogeochemistry of lakes, through the NSF-funded “Circumarctic Lakes Observation Network (CALON)” project on which she is a co-principal investigator.