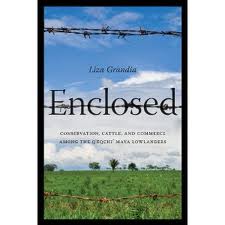 Liza Grandia, assistant professor at Clark University, finds it difficult to look at the coffee, bananas or sausage on her breakfast table without thinking about the territorial plight of the nearly one million people that make up Q’eqchi’ Maya, Guatemala’s second largest indigenous group, a group she has followed for nearly 18 years.

Grandia’s latest book, “Enclosed: Conservation, Cattle, and Commerce among the Q’eqchi’ Maya Lowlanders” (University of Washington Press 2012), explores the recurring enclosures of Q’eqchi’ common lands in northern Guatemala and southern Belize.  Since the Spanish invasion of the Americas, these people have been repeatedly displaced from their farms – first for coffee plantations, then bananas, and now for cattle ranching, palm oil plantations, and drug trafficking.

“This book is more than an anthropological text about yet another beleaguered indigenous group,” said Grandia.  “The destruction of Q’eqchi’ Maya livelihoods through land grabbing in northern Guatemala parallels the injustices that many U.S. citizens are suffering through foreclosures and other enclosures of public goods and spaces.  Defense of the ‘commons’ from corporate greed is emerging as a powerful iconic image for global social movements, perhaps best exemplified today by Occupy Wall Street.”

While most of the books’ text focuses on the first part of this process—the repeated loss of Q’eqchi’ territory to pastures, parks, plantations, and development plans—the concluding chapter explores how the same ideological framework behind the relentless privatization of commonly held Q’eqchi’ lands is also degrading public and community resources in industrialized countries. The author uses the tools of ethnography, history, cartography, and ecology to explore the waves of dispossession that unsettled these agrarian people.

Grandia has been an assistant professor in the Department of International Development, Community and Environment at Clark University since receiving her Ph.D. in anthropology at the University of California-Berkeley in 2006.  While also collaborating with a Guatemalan environmental organization called ProPetén since 1993, she has carried out almost seven years of fieldwork in northern Guatemala and southern Belize about the impacts of trade and corporate globalization on agrarian change.

Grandia received her Ph.D. in anthropology from the University of California, Berkeley, and her Postdoc from the Program in Agrarian Studies at Yale and bachelor’s degree in Women’s Studies from Yale University.