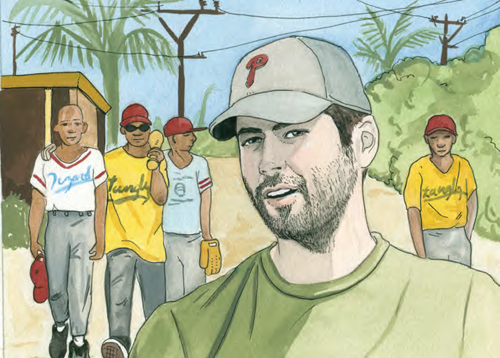 Watch a trailer from his film “Opposite Fields.”

The boy’s name is Ivan, and he is poor even by Ugandan standards. He lives with seven other relatives in an equipment shed, sleeping on the bare ground, which turns to mud during rainstorms. Once his eyes shut, though, he is happy.

“When I lay here at night, I dream about baseball,” Ivan says with a slight smile, looking directly into the lens of Jay Shapiro’s camera.

Ivan and dozens of other boys from Uganda are the stars of Shapiro’s documentary, “Opposite Field,” which chronicles the unlikely rise of baseball in the east African nation and the vision of a Long Island businessman who transformed swamps into ball fields to bring Little League games there. Shapiro has spent nearly three years filming the saga of Uganda’s Little League team, which in 2011 became the first African squad to qualify for the Little League World Series in Williamsport, Pa. In a heartbreaking turn, the team was denied visas to the U.S. because many of the players lacked the proper documentation that would confirm their ages.

“There was no intentional cheating,” Shapiro says. “Where they grew up, paperwork was not a priority. A lot of these kids really don’t know how old they are.”

At ESPN’s request, Shapiro put together a five-minute feature about the team that was aired on the sports channel last August. The response was overwhelming.

“We had calls from Hollywood stars, Major League Baseball stars, asking what they could do to help,” Shapiro recalls. “I had kids who wanted to send me their gloves.”

In the spirit of Shapiro’s profession of filmmaker, we’ll save the ending for last, and instead go to a flashback.

A native of Allentown, Pa., Shapiro had a passion for storytelling that early on manifested itself in short-story writing. At Clark, he took a screenwriting class and fell in love with the idea of structuring a story through film. “It fit my attention span better,” he laughs.

Shapiro became fluent in the techniques and technologies of filmmaking. He shot his own short films, found outside projects where he could apply his skills, and by sophomore year he’d secured an internship in the Philadelphia area to learn editing. “I think I earned half my credits outside the classroom,” he says.

Shapiro also earned an Anton Fellowship, which sent him to Ghana (he’d already been to Africa once before as a high school student). There, he gave his camera to a 10-year-old boy and had him chronicle his world. The result was the documentary, “Like Me, I am Here.”

“The quandary of Africa has always interested me,” he says. “I wanted to focus on the notion of changing the way people identify themselves, and how it can change the trajectory of a community, and ultimately an entire nation. What happens when you give a camera to a kid who’s never seen one — what’s that transformation like?”

After college, Shapiro moved to New York where he hustled for freelance jobs, including shooting industrial videos. He worked as an unpaid assistant on an independent film called “The F Word,” which led him into ad agency work.

Then Shapiro, a former high school baseball player, landed a job working for Major League Baseball. He began as a freelancer, editing each day’s game highlights from across the country for the league’s website. The position evolved into a full-time position, with Shapiro filming major leaguers for use in MLB marketing campaigns.

“It was a very cool, indulgent job that involving everything I loved in life: filmmaking, storytelling and baseball. I did it for three years; met most of the players, got to go to spring training. It was a fantasy job, but I was getting burnt out on it,” he says, then adds with a laugh, “Of course I could never tell my friends that.”

When the league realigned its operations, Shapiro’s job became redundant in New York, and rather than make a move to a new office in Secaucus, N.J., he decided to make a change. Earlier, Shapiro had met Richard Stanley, an area businessman who was building a baseball field in Uganda and who dreamed of hosting Little League tournaments there. With the assistance of Nick Goldfarb, a producer he’d met on “The F Word,” Shapiro worked to secure investors for a documentary on the Ugandan team, and beginning in 2009, he traveled to Africa, camera in hand, to film “Opposite Field.”

Shapiro acknowledges he caught lightning in a bottle. In a huge upset, the Ugandan team defeated Saudi Arabia in a regional final (played in, of all places, Poland) to earn entrée into the Little League World Series before the visa snafu dashed its chances. Their story drew headlines worldwide, including on the front page of the New York Times.

And now, the happy ending.

A community organizer from Vancouver named Ruth Hoffman learned that if it had been allowed to play in the World Series, the Ugandan team’s first opponent would have been Canada. With the help of Major League ballplayers like Jimmy Rollins of the Philadelphia Phillies and Derrek Lee of the Pittsburgh Pirates, Hoffman launched a successful $155,000 fundraising drive to send a Canadian team to Uganda, build more baseball fields there, and supply funds for the Ugandan team to travel to future Little League competitions.

On Jan. 17, on a brilliant day in Uganda’s capital city of Kampala, the Pearl of Africa Series was played, with the Ugandan team beating the Canadians, 2-1. The game, and all its peripheral drama and joy, was captured on film by Jay Shapiro, who, after three years, had the conclusion for which he’d hoped.

When this interview took place, Shapiro was shopping the distribution rights for “Opposite Field” and was in talks with Turner Sports about the possibility of making a basketball-themed film in South America. He also marveled, once again, that on the fields of Uganda he was able to unite his three loves — baseball, storytelling and filmmaking — in an endeavor that sometimes feels less like a job than it does a sweet dream.