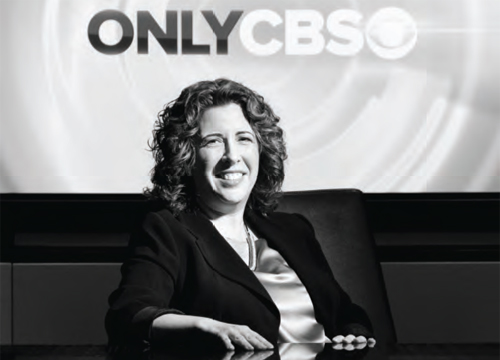 As the executive vice president of comedy development at CBS, she is pitched 400 sitcom ideas every year, and of those perhaps two will ever make it to broadcast.

She saw the everyman charm in the stand-up comedy of Ray Romano and helped shepherd it into the platinum success of “Everybody Loves Raymond.”

She battles the continuing fragmentation of a viewing audience distracted by near limitless entertainment options, with the goal of picking the shows that will amuse millions of people each week while also keeping advertisers happy.

Beyond that is Trilling’s own ascent to her current position, a storyline that at times seems so improbable that if it were pitched to her by anybody else she might not have given it the green light. Honestly, who would propose a plot about a young woman who more than 20 years ago ditched a promising copywriting career in Boston, moved to L.A., worked as a temp at CBS, and now oversees the network’s stable of hit sitcoms like “Two and a Half Men,” “How I Met Your Mother” and “The Big Bang Theory”?

The Clarkie is now the arbiter of comedy at the network that introduced America to the antics of Lucille Ball, wrung laughs from the rants of Archie Bunker and scored the highest rated TV episode of all time with the finale of “M*A*S*H.”

Trilling is well aware of the comic tradition she now oversees.

“I still remember the CBS lineup on Saturday night. I used to watch with my grandparents — ‘All in the Family,’ ‘The Jeffersons,’ ‘The Mary Tyler Moore Show,’ ‘The Bob Newhart Show,’ ‘The Carol Burnett Show.’ It was a big part of my life growing up, so to be at CBS — not to say I’m carrying on that exact legacy because those were such great shows — and to be attempting to put comedies on the air that people will remember years from now is always the goal.”

Trilling couldn’t have imagined her career trajectory when she arrived on campus in 1982, twenty-seven years after her father, Julian Goldstein ’55, graduated from Clark. The Long Island native majored in screen studies, a natural academic discipline for someone whose teenage excursions into Manhattan to watch old movies at the Bleeker Street Cinema made her something of a film geek.

“There were so few people with that major, we had to design it ourselves a little bit,” she recalls. “I thought loosely at the time that maybe I wanted to be a writer, but I didn’t have a grand plan for my professional life when I was in college.”

After graduation, Trilling moved to Boston with her Clark roommate, Diane Burstein ’86. She temped for a while, then got a job as a receptionist at a small advertising and public relations agency. Trilling worked her way up to account executive before switching over to the more creative pursuit of copywriter.

After four years, Trilling was eager to move to a new city. She decided on Los Angeles, figuring she’d work there for a while before ultimately settling in New York.

“When I came out to L.A., I looked for jobs as a copywriter because that’s what I was qualified to do. I interviewed at ad agencies and ended up getting a job at a small division of J. Walter Thompson.”

About two weeks into her new job Trilling had lunch with Tim Flack, head of the comedy department at CBS and an old family friend, to get career advice.

“He gave me great advice about how important it is to love your job, because when you think about it that’s where you spend most of your time. Copywriting was not a passion for me; it was something I fell into. I didn’t really think I had the creative ability to be great at it. I could get by, but I was never going to be at a top creative agency doing national ads.”

Trilling still harbored a love of movies and television, so she seized the opportunity to do some informational interviews with other CBS executives. One of them had an assistant’s position open in the Current Programming Department, whose executives manage the shows that are on the air.

“He said they would hire me as a temp, and if it worked out I could become permanent. I was on my lunch break at the ad agency when I got the offer, and I said yes,” she recalls. “I was 26 at the time, which seems very young to me now, but at the time I thought that if I was going to start over again and work my way up, I’d better get going. My mother was not happy about it.”

Trilling worked as an assistant for a year and a half, the temp job evolving into permanent status. She then advanced to a junior executive position, a promotion that actually paid less than her secretarial job because there was no overtime pay. But the new job was a “huge break for me,” and eventually brought Trilling into the comedy department.

Tim Flack, the family friend who’d offered Trilling career advice, still ran the department, but he was only there for about another year before falling ill and passing away.

“Maybe 10 or 12 years after that initial lunch, I had [Flack’s] job, which I say with complete love,” she says. “I know he would have been very proud to see it.”

Trilling acknowledges that in an often volatile industry, it’s unusual for someone to be at the same company for two decades.

“I truly knew nothing when I came to CBS as a temp, at least nothing more than the average TV viewer would know in terms of how this business works,” she says. “People know more about the entertainment business today than they did 20 years ago with Entertainment Weekly and all the online stuff, but I certainly didn’t know that studios produced the shows and then licensed them to the networks, and the networks air them but don’t always own them.

“That’s the great thing about coming in as an assistant, where what I really needed to do was answer phones and learn as I went. I’ve seen people come into these jobs at higher levels, maybe from other businesses, and I rarely see them succeed. Everyone I’ve seen succeed started at the bottom, because it’s such a great way to learn under the radar. I just put my head down and read every script that came across my desk. I kind of pretended I knew things and learned them as they happened.

“CBS has been a great environment, and I really love the people I work with,” she says. “I’m proud of having started where I started, and gotten to where I’ve gotten.”

Of the shows that have come under her purview, “Everybody Loves Raymond,” is a particular point of pride. Fifteen years ago Trilling championed the series, and helped put together the creative package to get it on the air. The show became an enduring hit.

“I’d seen Ray Romano perform at a comedy festival right before we ordered the production of that pilot, so I felt very connected to that show; I was able to have an influence in getting it on the air. It was something I felt very passionate about, something I loved,” she says.

Clark’s effect on her progression was evident even when she was still a student, Trilling says. Her junior year she worked as an intern at radio station WAAF, which gave her an insider’s view into the guts of an entertainment outlet. Observing how morning-drive radio worked — especially how comedy bits were developed and delivered — was “a huge learning experience for me,” she says. “Those internships and job opportunities you have in college have probably more influence on your ultimate career than the classes you take.

“I received a personal education at Clark,” she continues. “Some of my senior classes were just directed readings with the head of the department, which is something you can do at a small school. I think being able to forge those personal relationships with your professors is important on a number of levels. In my career, and I’m sure in many others, it’s those relationships, and interacting with people who want to help nurture your career, that makes all the difference.”

Offering behind-the-scenes insight during a panel discussion at Reunion Weekend.

Trilling is now in the midst of the fall TV schedule — new programs began rolling out in mid-September. At the time of this interview she was feeling good about the prospects for CBS’s new sitcoms (see sidebar) and was also confident about the popular mainstays. Like much of America, Trilling will be closely watching the progress of “Two and a Half Men” in the wake of the stormy departure of former series star Charlie Sheen. She’s hoping the show’s fans will embrace Sheen’s replacement, Ashton Kutcher.

The broadcasting landscape has altered dramatically during Trilling’s tenure. When she started in the business, three networks — CBS, NBC and ABC — virtually dominated the medium, with the newly emerging FOX just beginning to make inroads. Today, new cable networks sprout like dandelions to cater to every imaginable niche, and the Internet offers vast information and entertainment possibilities (including, on outlets like YouTube, the ability to turn schmoes into stars).

With all that competition, Trilling notes, the demand for content remains unabated, which means she will continue to listen to hundreds of show pitches and pull the trigger on new sitcoms. After all, people are always looking for a reason to laugh.

This story was originally published in CLARK Magazine, fall 2011.