Alice Higgins made a significant mark on Clark University 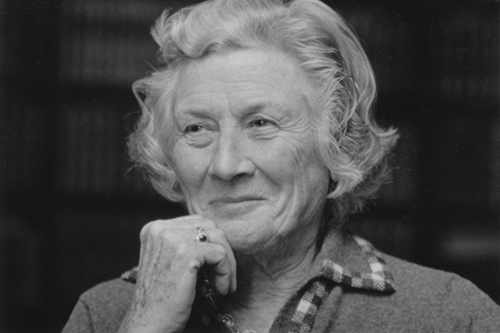 The name Higgins crops up in several places around Clark, including on a plaque next to Carlson Hall, on the Higgins School of Humanities, and Higgins University Center. In all cases, they honor Alice Coonley Higgins (1909–2000), who, with her husband, Milton Higgins, made a significant mark, not just on Clark, but on Worcester as well.

Growing up in Lake Forest, Illinois, the then-Miss Coonley inhabited a privileged world of servants, debutantes, and trips to Europe. She attended Milton Academy and then Vassar and Barnard colleges. But when the Depression claimed the family fortune, she took a secretarial job at the Austen Riggs Foundation in Stockbridge, Massachusetts, where she met future husband Milton Prince Higgins II of Worcester, heir to the city’s Norton Company. After impressing him with her ability to change a tire, the two fell in love, married, and eventually settled on Worcester’s Salisbury Street.

Despite some initial misgivings, the new Mrs. Higgins embraced Worcester as her own, and busied herself during WWII with managing her household and raising a family. During the 1950s, she accompanied Milton on business trips to Europe, Asia, Africa, and South America. As the wife of one of Worcester’s leading industrialists, she volunteered extensively in the community and became increasingly dedicated to Clark University, where, in addition to serving as trustee, she was instrumental in planning and fundraising for the Goddard Library, Kneller Athletic Center and Sackler Sciences Center.

Literature devotee, speaker of three languages, and active sportswoman, Higgins was loved for her optimism, humility, zeal to do good, and willingness to listen. Husband Milton said of her: “I tried to tame her over the years, but I failed.”

Some notable facts about Alice Higgins:

Do you know the mustard man?