Prospective Clark University students have streamed through the John and Kay Bassett Admissions Center since it opened in late 2010, and now they can put faces to the names that adorn the building.

On Saturday, May 21, during Reunion Weekend, a standing-room-only crowd of alumni and other well-wishers filled the Admissions Center to fete the Bassetts at the center’s dedication ceremony and to witness the unveiling of the couple’s portrait, which will hang in the program room.

John Bassett, Clark’s president from 2000-2010, and his wife Kay, flew in for the occasion from Washington state, where John Bassett is the president of Heritage University in Toppenish.

In a presentation punctuated by several ovations for the honorees, David Angel extolled the “value-centered leadership” the Bassetts brought to Clark, which has inspired students to fulfill their potential and make a difference in the world.

“We’ve benefited so much as an institution from their values, from their judgment and from their leadership,” he said. “You created the foundation, the platform, the direction and the values for Clark that will shape this institution for decades to come.”

Admissions Director Donald Honeman related a story he’d been told by the father of a prospective student who’d taken a campus tour. As the father recalled, during a stop at Red Square “all of a sudden this gentleman came up and interrupted the tour for a second and started talking about what a terrific community this is and what a tremendous academic experience students can have here at Clark, and then he went on his way. I asked the student tour guide, ‘Who was that man who was talking so eloquently about Clark, and the tour guide said, ‘Oh, that’s the president. He does this all the time.’” 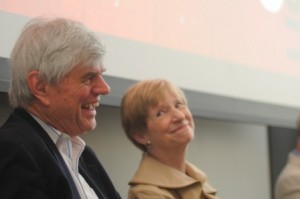 Honeman added: “It’s going to be especially enticing to do our presentations every day with a portrait of the two of you watching over us.” In his remarks, John Bassett acknowledged the array of attendees, including members of the Worcester community. He recalled a national meeting he attended in which Sen. Edward Kennedy told the audience that Clark “sets the standard for how a university should relate to its community.”

“That’s true in so many ways,” he said. “How meaningful the last ten years were for us. Clark will always be in our heart.”

Bassett then added he wants to track admissions over the next decade. “If [Clark] falls short in its goal for the next ten years, there’s going to be a new name on this building,” he quipped.

Kay Bassett said their experience at Clark laid the foundation for their work at Heritage University. “All the people here whom we’ve had the privilege of knowing and working with have given us the inspiration that we can make a difference in our new home. There are challenges out there, but we keep looking back and say, ‘We can do it.’”

A standing ovation greeted the Bassetts when the painting done by Charlotte Wharton ’80 was unveiled.