Changing the World… One Student at a Time

(This story was originally published in CLARK Magazine, spring 2011.)

The year was 1967 and Richard Ford was doing what he loved best: studying the vibrant cultures, social rhythms and political nuances of Africa. As visiting professor at the University of Natal, he’d traveled to South Africa with his wife Nancy to continue his research when he received an unexpected letter in the mail. It was from Saul Cohen, the head of the Graduate School of Geography at Clark University, informing Ford that a teaching position was open and asking if he would be interested in applying.

FORD WAS HARDLY INTRIGUED. In fact, he balled up the letter and tossed it into the wastebasket.

“I grew up in New York and I’d never even heard of Worcester, never mind Clark,” Ford says. “That night, Nancy and I were going to dinner with an American couple. He was a Yale Ph.D. in African history, but it turns out he grew up in Worcester. I said, ‘Worcester? I just got a letter from somebody in Worcester. Do you know anything about Clark University?’ So he told me all this good stuff about Clark. Later I went back, dug the letter out of the wastebasket, and wrote Saul Cohen a note that I would come to Worcester for an interview.”

Ford landed a history professorship at Clark in 1968. He brought with him his passion for international development, and here he found kindred spirits in geography professors Robert Kates and Leonard Berry, who co-authored a book with Ford titled “Making the Most from the Least” highlighting the plight of the world’s least developed countries. Over time an informal collaborative of professors from across the University’s disciplines were developing curricula, securing grants and conducting research that would result in practical approaches to longstanding social, environmental and economic problems that reached into some of the remotest corners of the globe.

Ford needed help to continue the mission, and was given the green light to hire a part-time professor, Barbara Thomas-Slayter, to help administer the burgeoning international development program.

Thomas-Slayter, whose expertise was centered on the dynamics of class, ethnicity and gender in Africa, particularly Kenya, discovered two distinct groups of students in the introductory development classes she taught. “There were students who were genuinely interested in finding out about worlds and cultures beyond their own, and there were international students who contributed so much of their own experience to the dialogue.” She remembers a student from Sarajevo who talked about not being able to go outside for fear of being shot. “When he spoke, you could hear a pin drop.”

Recalls Ford: “We were running probably the second or third largest graduate program at the University on Barbara’s salary, the salary of a secretary, and a budget of $12,000. We raised our own money for scholarships; I was writing proposals all night every night. And we loved it. The deans would fight us every time we went in for a budget increase, saying, ‘You’re not a department.’ We’d say, ‘Good, because we don’t want to be a department. We want to pull different people in from economics, geography and other departments to teach courses. We just want to be this little entity that brings good people together.”

The “little entity” couldn’t help but grow, and from its noble, humble origins blossomed into Clark’s International Development, Community and Environment (IDCE) department in 2000. The department is marking its 10th anniversary on March 30 and 31, with a program titled “Building Bridges, Breaking Barriers” that will include reflections on the first decade, and an all day symposium with six panels addressing topics like global public health and urban sustainability.

Director William Fisher had a response similar to Ford’s when, as an anthropology professor at Harvard University, he was approached in 1999 about starting up a new department at Clark. The school was a mystery to him.

“I didn’t know anything about Clark except for one thing: its program on International Development and Social Change,” Fisher recounts. “When I asked my Harvard colleagues what they thought about Clark, the response was that it was this absolutely great place, a little secret gem with fabulous faculty. A lot of colleagues had direct connections; they were either sending their kids to school here or they were involved in research with Clark faculty.”

IDCE was “built on the shoulders” of the International Development and Social Change and Environmental Science and Policy programs.

The Geographic Information Science for Development and Environment program provided a direct link with the Geography Department, and the Community Development and Planning program evolved a couple of years later. The mission from the beginning has been to cultivate a “transdisciplinary” approach that prepares students to become “agents of social change — locally, nationally and internationally — in an increasingly interconnected world.”

IDCE students are immersed in studies of grass roots initiatives, social movements, government policy, market approaches, entrepreneurship, technological innovation, individual action and education. Armed with the intellectual tools to effect positive change, they then put those tools into action everywhere from the neighborhoods of Worcester to the villages of Sudan — a marriage of research and practice.

“Those of us coming in to start IDCE were looking at the linking of these interdisciplinary programs that were going to look at questions of sustainability, development and social justice. We’d all been working in that field quite a while as individuals,” said Fisher, who had done much of his work in Nepal. “We all had alternative perspectives on grassroots-oriented, bottom-up development.” 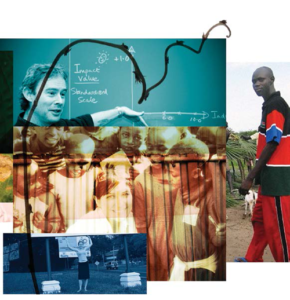 Fisher notes that IDCE faculty weren’t surprised by the level of resentment that had been fostered in other parts of the world. “For us, the frame wasn’t America and the rest of the world, the frame was about global capitalism of which American capitalist icons serve in a very visible way. The way it was cast in the U.S. was so provincial that in a way, it was frustrating for us. It made our work a little bit harder.”

One offshoot, he says, is that the U.S. became a less attractive place for international students to pursue higher education (currently about 40 percent of IDCE students are international) and it became increasingly difficult for overseas students, especially men from Muslim countries, to obtain visas to come to the states. “It’s still a challenge,” Fisher says.

The merging of environmental science and international development to create a dynamic, multi-faceted approach to global problems attracted Timothy Downs to Clark. The assistant professor of Environmental Science and Policy was one of the department’s first hires, after he’d worked in Mexico to create healthier settings in rapidly urbanized/industrialized areas that were plagued by everything from severe pollution to lack of basic services. Getting at the root of those problems involved navigating the political, social, cultural and ecological realities in those cities, in addition to the scientific underpinnings. One of his major projects was working to find ways to improve the water supply to the most vulnerable populations in Mexico City.

“The [Environmental Science and Policy] program has always been about how to harness the science to inform choices, policies and practices,” Downs says. “It’s a signature of the department.”

Laurie Ross, assistant professor of Community Development and Planning and coordinator of the CDP graduate program, came to Clark as a student in 1987, intent on studying psychology, until an introductory class in international relations “changed my world views in a lot of ways.” She worked for the ECOGEN (Ecology Community Organization and Gender) project, which conducted case studies on gender and resource management and development in half a dozen countries, and while completing her master’s degree in international development she traveled to the Dominican Republic to create “gender maps” of farms that detailed the differences in how men and women were utilizing land.

But despite her involvement overseas, Ross developed an even more intense interest in her own backyard of Worcester. She began working with the Worcester Family Research Project, which got her into the city’s neighborhoods and shelters where she interviewed families as part of a study on homelessness.

Today, Ross uses participatory and collaborative approaches to tackle issues like employment, tobacco control and gang activity that affect the city’s youth. She’s recruiting Clark IDCE students to be researchers on youth homelessness and to gather information for the Promise Neighborhood initiative, a federal grant program that would create a strategic plan for the Main South area to enhance investment and improve outcomes in the community.

“I find Clark students, admirably, want to get involved,” Ross says. “It’s important for them to have humility, to be aware of who they are and where they come from when they sit at a table with residents. I try to work with students to learn to sit and listen to what people are saying and think about the filters through which they’re hearing it, because it generally brings you to a deeper level of understanding and effectiveness.”