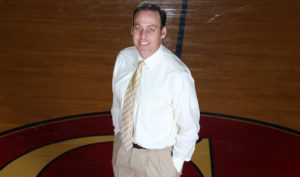 “I am deeply honored to be asked to join the Clark family and support the growth and further development of the Athletics and Recreation Department,” said Sullivan.

He will replace Linda Moulton who is retiring after 23 years. His duties will begin on February 1.

In his role at Clark, Sullivan will oversee the 17 intercollegiate teams that the University sponsors in NCAA Division III as well as the institution’s recreation endeavors, which encompass intramurals and wellness programs.

“Sean Sullivan will be an excellent addition to our campus,” President Angel said. “As Director of Athletics and Recreation, he will focus on working collaboratively with coaches, faculty members, administrators, and students to ensure that the athletic program excels both academically and competitively and that it is firmly integrated into the life and mission of the University.”

Sullivan has spent nearly 20 years in the world of intercollegiate athletics rising from a coach in the early 1990’s to most recently an athletics director at one of the most athletically successful, yet academically challenging programs in all of Division III.

At York, Sullivan guided the department to new heights, increasing the student-athlete grade point average by more than a tenth of a point to 3.18, graduating 98 percent of all four-year student-athletes and increasing participation in varsity athletics by 21 percent.

Sullivan has overseen a pair of major projects during his time at York: first, a state-of-the-art indoor facility that serves as the centerpiece of the athletics community and an all-weather outdoor facility both of which have allowed the College to host NCAA Tournaments in the last five seasons.

Under his watch, York also won its first-ever Capital Athletic Conference Commissioner’s Cup Award in 2009-10, given annually to the strongest men’s athletic program within the CAC.

He began his career at the age of 21 as the head coach of the men’s soccer program at his alma mater, the University of California-Santa Cruz, following a standout four-year career that saw him named a regional All-American in 1991. In five seasons, his teams won 70 percent of their contests, produced six regional All-Americans and he was named the UC-Santa Cruz Male Coach of the Year in 1996.

After a stint outside of athletics, Sullivan returned to his alma mater as the interim director of athletics and oversaw a department that won four national championships and six of the University’s 12 teams were ranked in their respective top 25 polls in 2000-01.

He then spent time as the Director of Recreation Sports at the University of California-San Francisco where he was in charge of 22 intramural and club sports programs which served over 2,500 graduate students, staff and faculty members.

“Clark University has a long history of academic excellence and athletic success,” said Sullivan. “As such, it is my plan to tap into this culture of achievement, by joining forces across campus, to help enhance the experiences of both the Clark student-athlete and recreational enthusiast alike.”

Sullivan earned a bachelor’s degree in American history in 1991 from the University of California-Santa Cruz. He also holds a master’s degree from the University of San Francisco in Sports and Fitness Management. In 2004 he earned a graduate certificate in Leadership for Change from Boston College and he is currently pursuing a Ph.D in Higher Education Administration at Northeastern University.

“From the discussions that I’ve had with coaches, staff members, students and faculty, it is clear that Clark is ready for a new level of excellence and opportunity within the department,” he said. “This challenge is nothing but invigorating. I am thoroughly looking forward to getting started in February.”

Sullivan and his wife, Jennifer, were married in September 2010.

An archive of News & Media Relations posts can be found at https://news.clarku.edu/news.