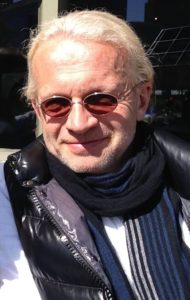 Thomas Kuehne, Clark University Professor of History and Strassler Family Chair in the Study of Holocaust History, was recently awarded a fellowship from the John Simon Guggenheim Memorial Foundation in support of his proposed book-length essay, “Struggling for Beauty.”

“Struggling for Beauty” will focus on the rise of “beauty” in modern world societies since the 18th-century Enlightenment, linking issues of self and society, body culture and visual culture, racism and consumerism, regional particularities and globalization. Professor Kuehne expects his interdisciplinary examination of these issues to invite  further inquiries into how and why modern societies, in particular in Europe and North America, struggle for beauty.

Professor Kuehne is among 180 artists, scientists and scholars to be selected from a group of 3,000 applicants in the Guggenheim Foundation’s eighty-sixth annual competition for fellowships, which are awarded on the basis of achievement and exceptional promise.  He also has received an invitation for a residential fellowship from the venerable Institute for Advanced Study in Princeton, N.J.

“Beauty matters. That it matters can be easily measured by the amount of money and the time people spend on making their bodies beautiful and their appearance attractive. Since the 1990s, beauty, understood as body aesthetics, has drawn scholarly attention in various disciplines, but has escaped closer examination in social and cultural history.”

Professor Kuehne’s academic and research is concerned with the relation of war, genocide, and society with long-term traditions of political culture of Central Europe, above all with the problem of locating the Holocaust and Nazi Germany in the social and cultural history of the 20th century. He is especially interested in synthesizing new approaches to the history of mass violence. His most recent book  “Belonging and Genocide: Hitler’s Community, 1918-1945” (forthcoming with Yale University Press, fall 2010), reveals how the longing for community, the practice of togetherness, and the ethos of comradeship became the basis of mass murder—how an advanced civilian society became a genocidal society.

Professor Kuehne has organized numerous conferences and edited several volumes to advance relevant scholarly discussions on gender, military and political history. His essay collection on the history of masculinities in modern Germany (1996) established this field in Central Europe and stimulated a broad range of innovative gender studies.

Professor Kuehne received his academic degrees in Germany. He earned his Ph.D. from the University of Tübingen in 1994 and taught at the Universities of Konstanz, Tübingen and Weingarten thereafter. A recipient of major grants from the German Research Foundation, he completed his habilitation thesis at the University of Bielefeld in 2003. He has been at Clark’s Strassler Center for Holocaust and Genocide Studies since 2004.

Since its founding in 1887, Clark University in Worcester, Mass., has a history of challenging convention. As an innovative liberal arts college and research university, Clark’s world-class faculty lead a community of creative thinkers and passionate doers and offer a range of expertise, particularly in the areas of psychology, geography, urban education, Holocaust and genocide studies, environmental studies, and international development and social change. Clark’s students, faculty and alumni embody the Clark motto: Challenge convention. Change our world.